` The Science of Winter for Kids | Destination Science

Every December, snow falls around the country and fireplaces get their pits filled with logs and embers. Winter is the coldest time of the year, bringing us closer together with holidays (and presents), but also plays the largest part in keeping us in our houses. From rain and sleet to storms and slush, the outdoors takes a turn for the frigid three months out of the year, if not longer!

So what makes Winter the coolest season of the year? Science, of course!

Who, What, When, Why and Where

So, what makes it Winter? When the United States and our neighbors to the north and south are snuggling up to the fire, why are our friends and family halfway around the world wearing beach shorts and playing in the water? It has to do with our relationship between the Sun and the Earth.

The Earth rotates on its own axis once a day and around the Sun once a year. During that yearly journey, there are times where we aren’t in the right position to receive a ton of sunlight. From November to January, the Northern Hemisphere (where we live), is pointed away from the sun, as the Earth tilts on its axis ever so slightly (23.5 degrees, to be exact). Because of this, places like Australia and parts of Southern Asia are enjoying the Sun’s warm glow. For those in the Northern Hemisphere, we are pointed in a different direction, making our days shorter, nights longer, and ultimately a whole lot colder. This gets the ball rolling on clouds, rain, and snow!

Walking in a Crystal Wonderland 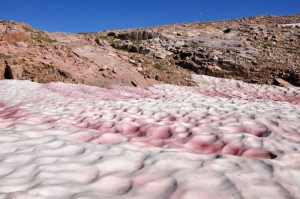 Typically, we think of snow as being a solid, white substance that easily clumps into balls and can be thrown at your friends! However, have you ever wondered what is it made of and why is it white?

Snow is actually a collection of ice crystals, tightly compacted into a solid mass when the temperature is below freezing (32 degrees Fahrenheit). Its white appearance comes from snow’s natural reflection of sunlight, bouncing nearly all light back and creating a clean look. Sometimes snow looks blue, because when light has to travel further through a larger, thicker piece of ice, it retains more color. There is even something called watermelon snow that looks reddish pink, as fresh-water algae (who happen to love ice) live in the snow and turn it a red hue.

Everyone has heard that there are no two identical snowflakes. Each one is formed from its own unique makeup and creates its own special pattern. However, did you know that there are actually multiple kinds of snowflakes?

The general term snowflake refers to a cluster of ice crystals, whereas hoarfrost is the type of snowflake you see forming on the ground or a tree when the temperature of the object its on is lower than the air around it. In this case, the moisture in the air goes straight from vapor to a solid, skipping the liquid stage altogether. Graupel are the transparent pellets that fall from the sky, as they were once snowflakes that remain liquid throughout their descent. They are smaller than hail and soft like snow, not hard like ice. Finally, polycrystals are much more defined than the traditional snowflake, as they are built from individual ice crystals, not clumps or clusters of crystals, creating a cleaner look.

Even within these groups, there are dozens of variations. Check out this guide to snowflakes and pick your favorite!

So, the next time a snowflake falls on your tongue, you’ll know exactly where it came from and why!

Financial Assistance
SUBSCRIBE TO OUR
NEWSLETTER
and stay up to date on Destination
Science news & savings!